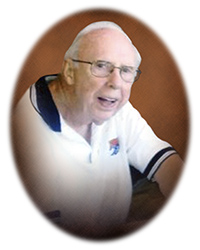 Kenneth was born in Whitaker the son of the late Joseph and Lilly (Durst) Caspar;

Kenneth was a WW II U. S. Army Air Corps Veteran and a former past owner of Caspar’s Appliance in Homestead;

Cherished brother of Howard Caspar and the late Jane Zatek and Russell Caspar;

Friends received on Thursday from 6 – 9 PM and Friday from 2 – 4 & 6 – 9 PM at the George Irvin Green Funeral Home, Inc., 3511 Main St., Munhall, 15120 (412-461-6394).  Funeral Service will be on Saturday at 11:00 AM in Whitaker United Methodist Church.  In lieu of flowers memorial contributions may be made in Kenneth’s name to Whitaker United Methodist Church 124 Arkansas Ave., Whitaker PA  15120.  Please share your memories and condolences at georgeigreenfuneralhome.com

Charitable donations may be made to:

To order memorial trees or send flowers to the family in memory of Kenneth Caspar, please visit our flower store.
Send a Sympathy Card